The morning was chilly, but enthusiasm was high as we gathered for Day 1 of the Nevada Northern Railway Photography Workshop. I ate breakfast in the hotel, so I passed on the selection of donuts provided by the staff (my body was very happy with this choice). We got to know each other a little more as we shared images from past shoots. The group included accomplished photographers. Some had been to Ely before and had great images to share. One participant was from Nebraska, and was a regular contributor to the Union Pacific Railroad with his images of the steam locomotive 4014, the legendary Big Boy, recently restored and touring the country.

After our morning classroom session, we headed out into the rail yard. First stop was the Engine house, where I grabbed a few shots.

One of several images inside the Engine House. I used a softening filter to give this a more abstract look.

We spent much of the morning in the yard watching the locomotives move around the yard as they gave us photo opportunities and set up for tomorrow’s action. The 40 powering through the yard. RIP Building behind and Coaling Tower on the left. 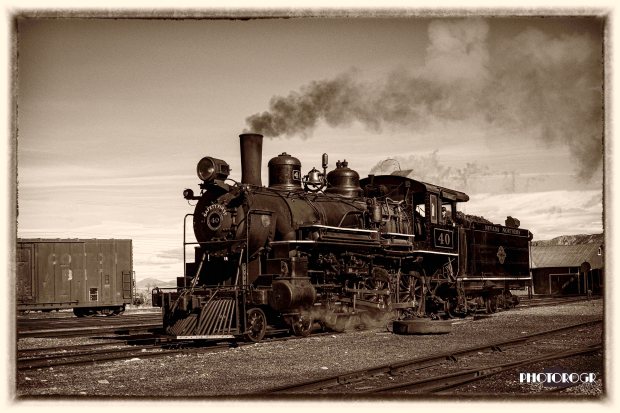 The 40 was our primary subject in the yard today. I tried this sepia-style filter and like the result. The 40 approaching the ‘service station’ – the legs of the Water Tower and the dump chute of the Coaling Tower.

A popular shot among the instructors, this view of the 40 under full steam on the east side of the yard . In our final session, I was told this would make a great magazine cover.

A fun picture of the 40 framed by the base of the Coaling Tower. Great sky and the mountains in the background.

After lunch, we all enjoyed a class in lighting. I’ve never taken a lighting class before, so I really enjoyed the learning opportunity. The instructor pulled me out of the crowd and had me sit in the subject chair while he moved lights around and showed us different techniques. He gave me all the pictures he took. No, I won’t be sharing them.

A few more shots around the yard and some dinner, then we moved inside the Engine House for some strobe lighting shots. The staff set various scenes for us, we set our cameras and opened the shutters, the strobes popped and we had images. Here’s a sample of the evening’s activities. The 40 in the foreground and the 93 in the back, with a sepia filter. Most of my night shots are black and white, since the black of the locomotives and lack of background lends itself to monochrome shooting. Lots of steam and smoke, giving these images a surreal feel. Another participant shared his secret for enhancing the smoke and steam during processing – and it works!

The trick for enhancing the steam also works on the lights. In this image, it helped disguise that I had removed the ugly modern sodium vapor lights in the ceiling, maintaining the old time feel of the image. I never imagined I could make images like this.

I returned to the hotel very satisfied with the day and almost 500 image files to process. Working around the coal fired locomotives is interesting. Safety First – as it says everywhere in the yard and on the front of the locomotives. I emptied a few cinders from my shoes and out of the hood on my jacket, and detected a slight odor of train in my clothes, but it was all worth it. Two more days of shooting and learning. Stay tuned and enjoy – PHOTOROGR

One of the reasons I love photography is that I never stop learning. Whether it’s a new technique or equipment or subject or even just a different way of seeing things, there’s always something to learn. Now that the Raptors have moved on to other places, my eye has turned to smaller and closer subjects – the pollenators and flowers in the back yard!

Over the years, my cameras and I have spent a lot of time in the yard and have enjoyed some success. Although Spring is still fairly new this year, I’ve had a good time so far. This is a Hyacinth, and it was the first flower to bloom in our yard. I put my Canon 6D Mk II with a 50 mm lens on a low tripod and got as close as the minimum focus distance would allow. I did not use focus stacking, but it may happen this year.

All images processed in Adobe Camera RAW and PhotoShop, with a Nik ColorEfex Pro filter. 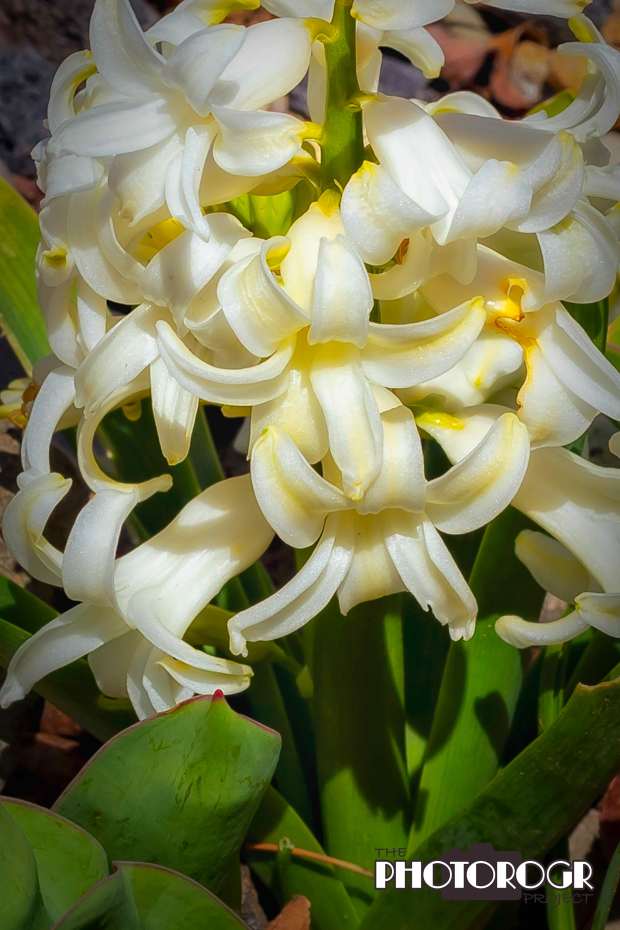 I upgraded my mobile phone to an iPhone XS a couple months ago and I’m slowly exploring its photographic capabilities. With Spring so young, the Bees are working very hard and are tough to capture…but it can be done…even with an iPhone.

This flying critter was on our Peach tree – looking forward to those peaches!I also bought a new Super Telezoom lens this year and decided to see what it would do on close up shots. Mounted on my 6D Mk II body – a full frame sensor camera – and with a minimum focus distance of more than 8 feet, the Bees are very small so the following images are heavily cropped. The end result, however, is very nice.

This Bee is on one of our Chanticleer Pear trees. 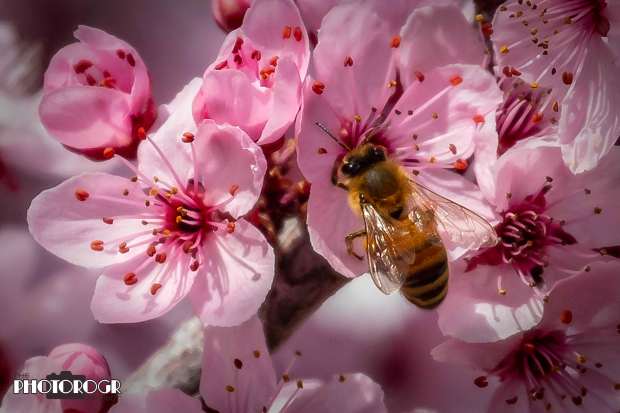 Our Flowering Plum tree has been very popular with the Bees this year.

And so it begins. Spring has sprung and it’s time for some close up. I’m ready Mr. DeMille…

Last month I shared some silhouette images with you – images I made during one of the classes I took at the Winter Wings Festival. I also took a class in wildlife as fine art which is the subject of today’s post.

I was out the other day and I found these two Geese floating in one of the irrigation ditches in the Carson Valley. Geese aren’t my favorite subject and the light wasn’t in my favor, but I decided to try something new using the techniques I learned in Klamath Falls and seeing if I could make some ‘fine art.’ I made several images using various exposures. Fortunately, the Geese were just floating along so they weren’t disappearing into the distance or making great ripples in the water.

When I downloaded the images and began processing, I tried several different ideas – color versus monochrome, variations in contrast and color, and a variety of filters. I ultimately chose this single color image, processing the dark areas into silhouettes to accentuate the position of the Geese on the water and in the frame using Adobe Camera RAW, and then finishing in Photoshop and Topaz Studio. 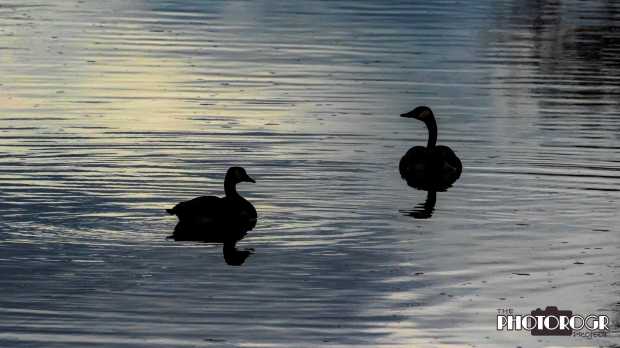 Round Top, above Winnemmucca Lake as seen from near Frog Lake, on the trail from Carson Pass.

I shot this image using bracketed exposure, merged in Adobe Camera Raw, processed further in PhotoShop with a filter from On1 Photo RAW.

I’m slowly working my way through my images from Yosemite National Park. I tackled some of the images from our trip on the Tioga Pass Road, crossing the Tuolumne Meadows, last Saturday. There weren’t as many people in that part of the Park compared to the Yosemite Valley, but the road had plenty of traffic and parking was a bit of a challenge. The smoke was much less, too.

This image is Lembert Dome, and I made the image looking northeast in the early afternoon. I blended the zero exposure and underexposed RAW format images in Adobe Camera Raw to bring out the sky, and applied a filter in Nik ColorEfex.

I love the Hibiscus Flower we have in our backyard. I don’t know why, but this year this plant is producing a huge number of blossoms – each one about 8″ in diameter. 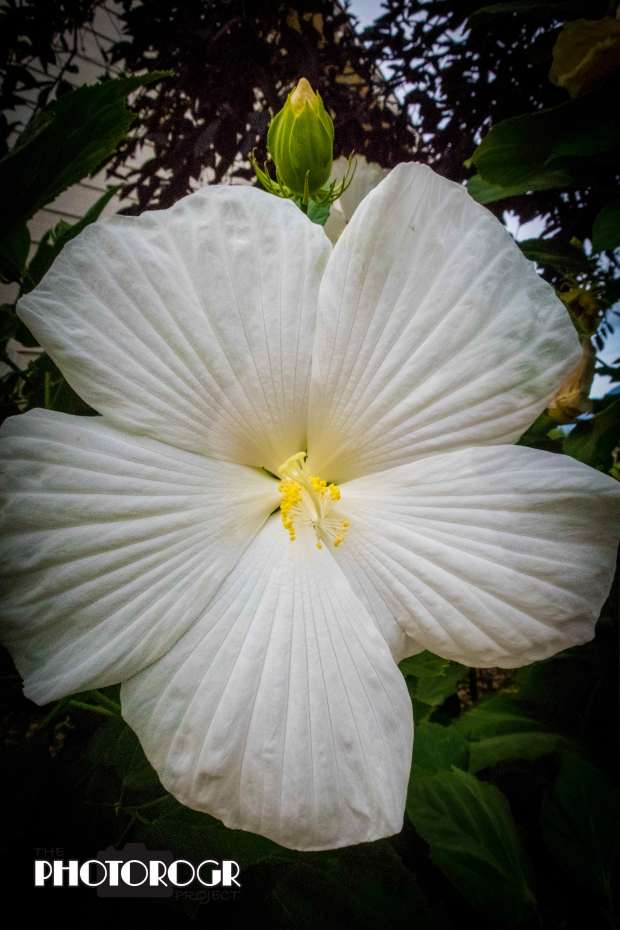 Today’s PS Challenge image comes from the Kinney Reservoir, taken a couple weeks ago on my adventure up CA 4 to Ebbett’s Pass.

As usual, I bracketed exposures, merged and toned in Adobe Camera Raw, then edited in PhotoShop with a Nik Color Efex filter. The image was made mid-day, just after lunch. 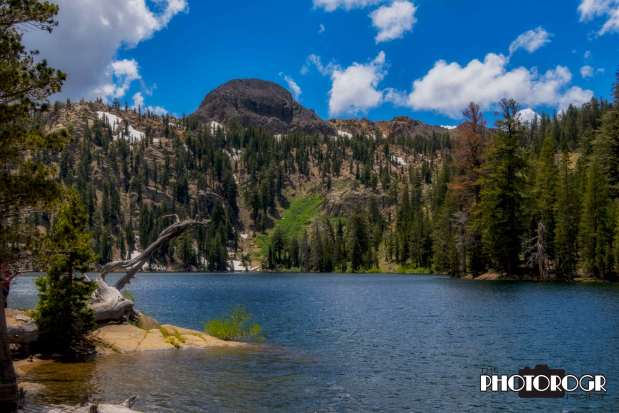 Today’s PS Challenge image is a close up of some Phlox blooms, from our back yard. I bracketed exposures but only used the under and normal exposures. I merged them in Adobe Camera Raw, cropped in PhotoShop, applied a Nik filter, and finished the image with a little more sharpening in PhotoShop. Please note, this is natural lighting – no flash used. 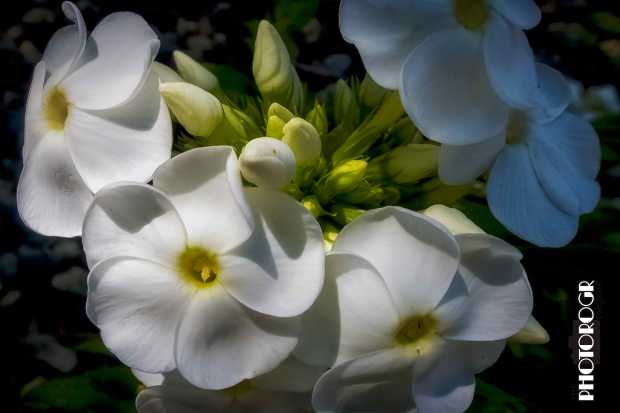 I drove up to Reno yesterday to have dinner with an old friend. On my way home, the clouds to the east were just gorgeous so I stopped at the Bellevue interchange (I-580 along Washoe Lake) to take pictures. This image was made looking northeast towards Reno, which was behind me as I was driving.

This PS Challenge image comes from Fisherman’s Wharf in Victoria Harbour. The image was made using bracketed exposures merged in Adobe Camera Raw, then processed in PhotoShop using several layers and masks. This was my most complex image processing to date, and challenged all my PhotoShop skills.

The boat in the background is the MV Coho, the ferry between Port Angeles WA and Victoria.

I like the result, and hope you do, too. I’m thinking print on metal! Enjoy – PHOTOROGR